So it appears that it is November the 5th: Guy Fawkes/Bonfire/Firework etc Night.

The members of the Gunpowder Plot in fancy dress as themselves?

You’ll be pleased to know I have spent a not insignificant portion of today searching the farthest reaches of the internet (actually, I would really like to know what the farthest reaches are – but this 1995 gem has got to be close*) in the hopes of validating a Guy-Fawkes-Misconception-Hypothesis that I was certain would be proved correct.  *Modern Ferret Magazine is also right up there, but now I want a ferret, although I hear they are deadly and those authors stopped owning them for mysterious ‘health reasons.’ 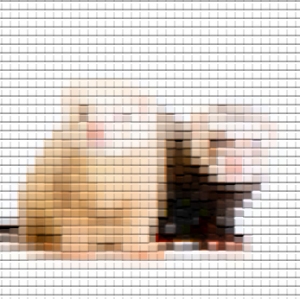 Anyway, the GFMH is as follows: The internet abounds with the musings of many ignorant people who have extrapolated that the holiday they are celebrating is in fond commemoration of the victorious heroics of Guy Fawkes. This mental connection seems inevitable and doomed to be formed because… 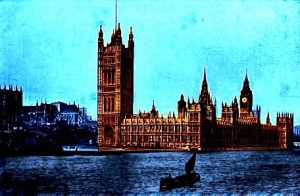 Surprisingly though, my faith in humanity seemed to have for once underestimated these darned critters. Most questions the netizens of Ignorantville are asking revolve around why a celebration exists around a potential terrorist attack; a relatively valid question and easily answered as more of a celebration of the fact that it didn’t happen, sectarianism aside. Other than that, people either seem to know what its about or are too preoccupied with seeing pretty fireworks in a relatively minor annual event and/or don’t care enough to write about or assert their misconceptions about it. In any case, good on you humanity. Take a bow.

I did however find four shiny examples of that endearing idiocy we have come to expect, nay demand, of our species. In no particular order (well the order I found them in actually):

No 1: The Ironic Spiral:

I love that special irony that comes from berating the ironic situation of those mask-wearing “historically deprived morons” [sic] who do so because Fawkes “blew up parliament.”

What exactly did Guy achieve I wonder? Capture, a foiled overthrow plot, and an execution courtesy of ‘the Gov.’ Luckily it was a ‘victory’ for him.

No 3: The Hero of Whatever:

Indeed what country at all? Point in Case.

No 4: Hilarity is at Stake:

Here lies Guy Fawkes, the Clumsy Activist. May I just point out that “Hilarity is at Stake” was a pun and quite a good one at that. Bear in mind that Fawkes effigies were traditionally burnt (not so much nowadays apparently) and burning people was/is commonly done ‘at the stake.’ Finally, note that the comment above argues that this is done with ‘good humour,’ hence the fact that “hilarity is at stake.” Did I just ruin it? Mayhaps. But I’d rather not have it overlooked and I wouldn’t have had to spell it out now had you paid attention the first time. I bet you also skimmed over this post title – it’s actually an obscure reference to the fact that the plotters met in a inn (something about a duck*) in The Strand in London. I think we’ve all learnt something about the blogging art today. *It was The Duck and The Drake.

I know I said four examples above but, I didn’t know quite what to make of this next one. It’s not exactly ignorance, but rather a breed of fanatical delusionism from someone who evidently thinks a tenuous connection or (if you read the whole hilarious article)in this case loads of different and contradicting tenuous connections based on pseudo-etymology, constitute a satanic conspiracy. 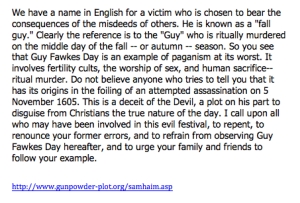 I will simply use another quote from this same article: “With an informed and aroused Christian populace, we can hope to stamp this thing out once and for all.”

So despite humanity’s generally well-educated consensus on this very-easy-to-incorrectly-extrapolate issue, it is still pleasing to see there are still those darling misinformed, or ironically self-termed history-deprived morons, out there to make life and blogs interesting. Take another bow.