Several years ago I was on a bus and an oldish woman, grey-haired and cranky, noticed I was reading a music score and demanded my opinion on a certain situation.

It turns out she was a school teacher who had been having confrontations with a grade 10 student who couldn’t be bothered doing any schoolwork. His justification for this was that he was going to be a famous rock musician and thus school curriculum wouldn’t matter as he ‘played guitar’ and had ‘over 1000 hits’ on youtube. Conversely the teacher went a little too far and tried to get me to ‘admit’ that not only is that no indication of future success but also there could not possibly be any careers whatsoever in something like ‘music.’

On this occasion I strongly sensed here was a person who only wanted their views reinforced, so I made a non-commital sort of answer. But I think it poses some interesting questions.

Obviously, with the situation presented there is obviously a lot of ignorance on both sides. In all likelihood the student was not going anywhere with a bloated sense of achievement, and a dim awareness that there were thousands if not millions of teenagers with similar ambitions also posting indistinguishable generic rock/metal videos having had little music education. Similarly if a student gives up so easily on schoolwork at a mid-highschool level on grounds of perceived future fame, then chances are they probably don’t have much in the way of … realism?

On the other hand, I can think of a few notable exceptions of people who have made a massive impact in music, and art in general, with little/no promise. Satie for instance – apparently as a student his piano examiners called his performances ‘worthless, mediocre, feeble, insignificant and laborious.’ In other words, perhaps a little hesitation is called for on the part of spectators before condemning someone ‘worthless, mediocre, feeble, insignificant and laborious’ attempting to swim in the foul, murky waters that comprise roughly  71.11% of the art world. Sometimes ignorance and/or pigheadedness can be bliss. Also might I point out that even those who approach it the ‘right way’ with swimming lessons and patience frequently drown or leave and do something else. 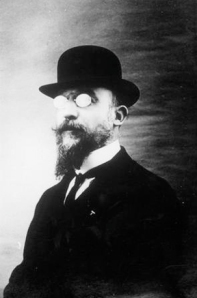 To condemn anyway, the student was most likely an unmotivated, untalented s@#t who talked back to teachers and was oversubscribed to the idea of sex, drugs and rock ‘n roll, so brilliantly advertised in movies, that any moron who mindlessly thrashes at/holds a guitar or makes noise at a drum kit is the modern day equivalent to the “Wander above a Sea of Mist,’ with female attraction proportional to the decibel level, instead of number of romantic illnesses (consumption, syphilis et al). 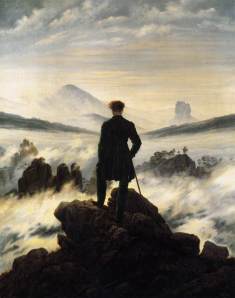 Behind him is a waiting helicopter, film crew, hair stylist and bear handler. Sigh. Honestly, no-one ever dressed like that to explore. I hope.

Furthermore, his delusion at having ‘hits’ on youtube (Nyan cat has over 64 million) leading to fame grossly oversimplifies the complexities of the ‘music industry’ and a somewhat arrogant expectation that before the end of compulsory schooling some wandering talent-agent is going to comment on his video with ‘OMFG your going to be next BIG thing!’ ([sic]) leading down a short happy fantasy path to high-profile tours, obscene wealth, sex, grunge metal, awesomeness, sex and assorted luxuries, including a yacht.

Seems like a good place to put it. Against a backdrop of more unique talent.

The other party however, represents another breed of ignorance. An antique attitude that demands following the safe, established education-system approved pathways to success and happiness (teachers/grown-ups know best!) In other words, it means being a nice, good, punctual, well-behaved and dressed student, always doing the allocated homework, going to university where they carry piles of books between buildings and wear glasses, and then ultimately settling into a nice, sensible career such as teaching or accounting. If the lambs go to any options outside of this predictable sphere, they become lost souls. Hippies, drug addicts, delinquents and musicians!

The ‘teacher’ component of the situation could not and does not want to comprehend that people can survive outside of a nice 9am to 5pm job. Perhaps it is a form of repression? Back in stricter times, and without the world-wide social network that is the internet – a plethora of influences, the old-fashioned student was left with little choice but to ‘follow the fold.’ Set in relief among the current generation of both perceived and actual scallywags and rapscallions, going off and doing their own thing, it would not be surprising if a measure of resentment remains to snarl at their freedom, originality and ambition.

So, at length, this is my real answer. Stop being so closed-minded and let him probably fail on his own. That way you won’t look so bad if he succeeds, or he’ll learn the hard way and won’t spend the rest of life regretting not taking the risks in the first place and ending up as a bitter husk.

It’s been a while since I was able to complete a rant – usually they just keep going until I think it’d be far too depressing and rambling to post.

Good Morning! For lack of inspiration, another brief look at some artwork.

I think sketches are the order of the day. (Although apparently ‘Healthier Breakfast Items’ are according to google).

Sketches. What I like most about them is you don’t have to worry about colour, only shading, and it is one of the more forgiving mediums (coming in closely behind the archaic Microsoft Paint and the immortal etch-a-sketch. Although the latter can be a little too forgiving…

Also, it’s a fast track to quasi-realism without all the fuss of waiting for paint to dry.

So. Going through the output we have chosen the Sketch of Ella Grainger:

Percy Grainger’s wife Ella Grainger. This photo is probably before they met, though I cannot be bothered to check. It was one of the only (read: the only) artwork in which I attempted sequential photos for future entertainment: 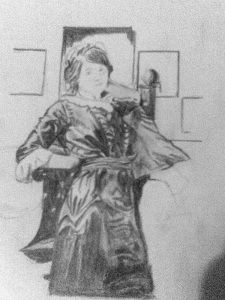 Filling in the Clothes

1st Draft of the Face 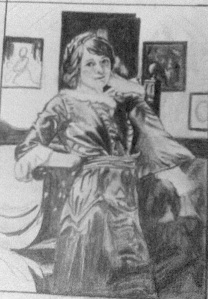 It is one of the few genuinely ineffectual instruments (the Clavichord is another) that even the most aggressive approach will fail to draw out anything more than a soft mezzo-forte. It is of the same family as those dreams where you’re trying to run away from/to something and can’t seem to make much progress. It’s infuriating. 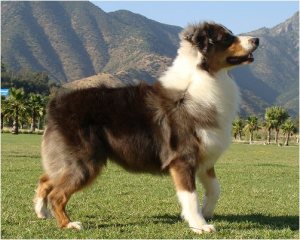 This Dog is Named Celeste.

Following this tangent briefly, I rarely was able to get very far when dreaming about being near my home – usually once it was out of eyesight I’d get distracted or something. 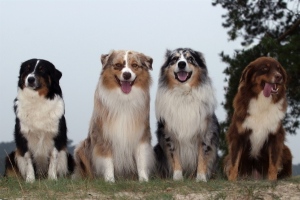 Back on track. Yes the celesta seems to suck in more noise than it produces, even from a purely percussive standpoint. Though let’s not stand there as it’s probably self-explanatory. Laws of conservation of energy aside, if you are a composer and you think that doubling the brass section on celesta at pitches some 74 octaves overhead will prove effective, please keep firmly in mind what inaudibility sounds like. And if the celesta player realises they can’t be heard they will judge you!

Actually I doubt there are pure celestists out there. Let’s check!

Ok a brief google search for the following terms and what I learned:

Celestists: Apparently this word has no anagrams. Rather strange for such a good vowel/consonant ratio. But these are tough times.

Celesta Concerto: There is actually a recent (2010) concerto for celesta and chamber orchestra by Elliot Gyger. Understandably lots of pianissimo for the orchestra

Celesta Virtuoso: Nothing related to the concept of a virtuosic celesta player. There may be an iphone app or something.

So there you have it! No-one has been game enough to base their career on a mechanical set of quiet tuning forks. 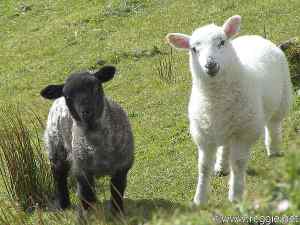 We have learned something worthwhile today.