Today I began the one of many room cleanses – this one more severe/Spartan than most as I’m moving overseas soon – and came across an item of immense age and absurdity.

It was 2000-and-something… mid- 2007 I’m guessing…When I made a trip to the Conservatorium library, largely out of boredom, in order to borrow out a book at random. This task usually proved not particularly difficult, and a very old book without any sort of title on the cover caught my eye in the instrument section.

I immediately borrowed it out, for it was none other than William Dale’s “Tschudi: The Harpsichord Maker”, the full text of which can be unnecessarily found here.

Wonderfully fulfilling my aleatoric selection requirements, this particular magnum opus was published in London by Constable and Company in 1913 (for ultimately no real financial gain I imagine) and I freely admit to numbering among the masses of scholars and musicians who, upon opening this book, failed to glean any useful information.

Yet it was on this particular book opening within the library that an object of apparently not insignificant value fell out from the yellowed pages, in mildly surprising good condition…. 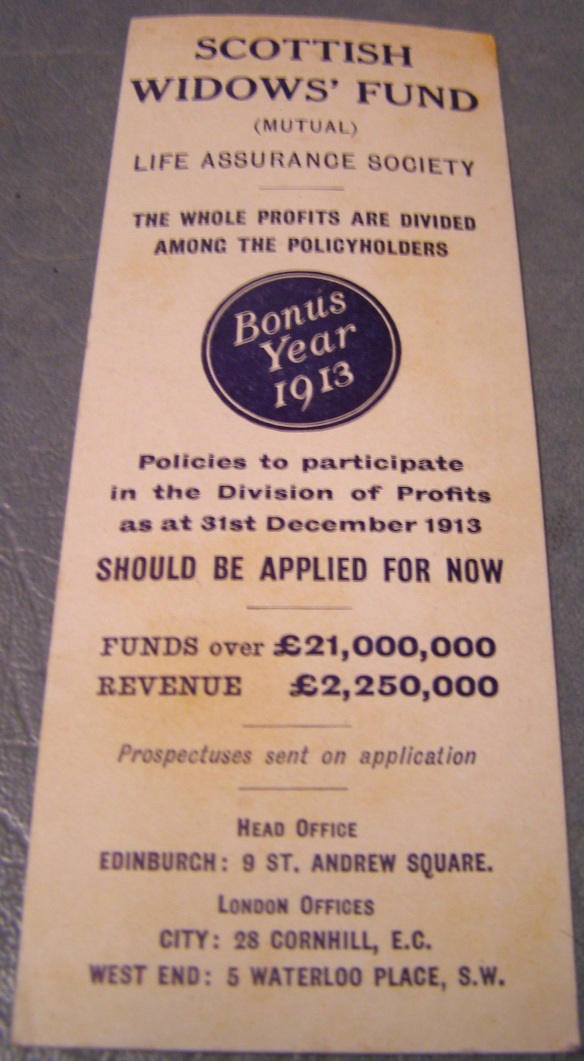 So. Just how far removed is it from the world we live in today?

Well, you will be most pleased to know that the Scottish Widows’ Fund began in 1812 AND is STILL OPERATING TO-FREAKING-DAY – being an official pensions and investment provider.

They have a website, which I half-heartedly encourage you to visit, but in your spare time only.

What is most alluring about this bookmark is the “Series of Designs by the famous Artist Walter Crane” (who died in 1915 I might add!) of which this present subject is “April.” On yet another side note, Crane was a member of the “Arts and Crafts Movement.” Western Civilisation must be indeed grateful and even mollified that such a movement existed.

April. That’s right! One of presumably twelve bookmarks! (ie: months in the year)

The alluring part is of course the invitation: “The complete set may be had free on application to head office.”

Does the offer still stand?

I initially wanted to find out.

There were three options:

1: Send the arrogant demand to the supplied addresses on the bookmark (at which the SWF no longer resides)

2: Send it to their new residences.

3: Harass Scottish widows or their descendants.

However. I feel rather bad now, for in my research for this blog I found it is actually a rare and relatively valuable collectors item.

Well I guess I have to thank the protectively mundane nature of Dale’s “Tschudi: the Harpischord Maker” that someone in the UK in 1913 tried to read it, left their everyday bookmark inside (free to be had on application), quickly lost interest, sat the book around, somehow had it donated to the Queensland Conservatorium, where it was speedily neglected by all (the treatment to which it was accustomed), with minimal disturbances even in tagging and cataloguing.

It therefore took  a completely random excursion to dislodge this artifact.

Moral: Do things that you cannot justify or account for. There is a minutely small chance it will pay off.